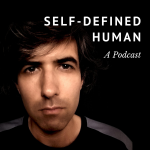 This is the first episode of my podcast, Self-Defined Human. Let’s see where we go from here.

Stop being a Victim. Be a Creator instead. Learn about the Drama Triangle vs. the Empowerment Dynamic. Two radically different paradigms for viewing your role in the world.

The Empowerment Dynamic is from David Emerald.

Most of us look at life in terms of the drama triangle. every interaction you have with other people, you put yourself and other people into one of three roles.

You’re either the Victim, the Persecutor or the Rescuer. You could think of this like you’re either a Victim, a Villain, or Hero.

the whole structure of our society is based on this concept. You have a Victim and yellow Persecutor, and the Persecutor is doing something bad to the Victim , and The Rescuer has to save the Victim from the Persecutor. We take it for granted.

You may say, “well, obviously.” it seems so obvious that this is just how it has to be. Because, if someone is suffering, then it means that someone else has caused it. And, and if you can see that someone is causing it…

what is the conclusion that you draw from this, when you see that somebody is suffering as a result of something that someone else did?

The way that you link these two events together, it’s up to you. It’s not obvious. It’s not just a foregone conclusion that this is just how it’s going to be. It’s not.

You think it is, right?

Nobody wants to be a Victim. Nobody wants to be called a Victim. If I call you a Victim, what happens? I become a Persecutor. Immediately. If I tell you that you’re letting someone else take advantage of you, if I tell you that you are the one who’s responsible, that you are the one who is responsible for your own suffering, you see me as a Persecutor.

Why is that? Why don’t you want to hear that?

Sometimes I’ll say something, and somebody else will think I’m saying that. Because, we know that it’s not good to be a Victim. We know that.

You know, the way that you interpret events is that you take the things that happen, the things that you could observe objectively, and you string them together. You connect the dots and you make a story out of it. You find some interpretation on it.

Your mind does this automatically. You don’t even know that you’re doing it. Most people don’t even think about this kind of thing. It just happens.

We blame people for things, when something bad happens. We say that it’s somebody’s fault. we say, they deserve something.

It has nothing to do with me, because I don’t speak that language. That’s my choice. But, you do, right?

“Oh, no no no, Michael. It’s not that I don’t like it, it’s an offensive thing. It’s inherently offensive.”

No, the problem is that you don’t like it. You. Why? Because it’s your preference. You would prefer that those things weren’t said to you.

Yeah, okay. That’s not even true. You prefer that these things are said to you. That’s why you get so excited when somebody says it. When somebody offends you.

Is this fun for you, to live your life that way? In that drama triangle?

I doubt it very much.

There’s an alternative. The alternative is the empowerment dynamic. This is invented by David emerald.

You should check out this book he’s got, The Power of TED*.

Does that offend you?

of course it offends you. you don’t want to be a Creator.

Why is that? Because creators have a lot of responsibility.

Calling you a Creator, if you’re stuck in the drama triangle, is equivalent to calling you a Victim. now, I’m calling you to task and I’m asking you, “hey, why haven’t you been created? Why have you been spending all your time running away from Persecutors? Why has that been occupying all of your time? “

See, I don’t see it that way. You know, sometimes I’m a Victim. You can call me a Victim, that’s okay. You can ask me, “hey Michael, why haven’t you been creating? “

That’s fine. That’s fine for me, because when I notice that I’m in the drama triangle, I step outside of it. I don’t see myself as a Victim, I don’t see other people as Persecutors , and I don’t believe that anybody needs to be rescued. I don’t.

The whole thing’s a game. I always think about Marshall Rosenberg, the founder of Nonviolent Communication, who says, “don’t do anything that isn’t play.”

See, it’s not that serious. But, you want it to be so serious.

Remember, when you were a kid, you created a lot. Kids are very creative. All day long, creating things. That’s how I was. I don’t need to give you examples, you know it’s true.

But then, we become adults, and what happens?

It’s not even when we’re adults.

This happens, maybe 9 years old or so? We get fearful. We get really scared, and we see that the purpose of life is to follow rules and not break the rules. And not be in the wrong. To not be the ones who are to blame for anything, because we want to be right.

So, we invent these religions where we learn how to be saved, Because we have this compulsive need to be in the right.

That’s how future-fixated you are. you imagine this infinite future where you’re going to be suffering the whole time. That’s what it’s like for you, because you’re so obsessed with this idea that you need to follow the rules.

That’s your thing, Because you don’t see it as a game. You see it as something that has dire consequences.

See,  in a game, when the game’s over, game over. Put it away, go do something else, and come back to it when you want to play again. You know it’s just a game. that’s fine. No problem.

That’s the story the Victim tells. ” I was just doing nothing, and then you messed it up. “

What’s so great about nothing? Why is that the story? Like, that’s the ideal state: “I’m just doing nothing I’m just minding my own business.”

You’re going to be spending a lot of time after you’re dead doing nothing. See, this is the chance you have right here to do something. These few years, where you could potentially do something. But no, you’re just complaining about how no one’s letting you do nothing. I mean, come on, that’s ridiculous.

You can do whatever you want.

But now, you have some responsibility, because if you’re the Creator, you can’t look at other people as Persecutors. Or, as Rescuers. You can’t, because that doesn’t have any importance anymore.

When you look at somebody as a Persecutor, that’s what they’re doing. They’re messing you up. But, you’re the one who’s deciding what happens, because you are the Creator. So, the Persecutor becomes the Challenger.

The Persecutor becomes the task. That’s what you’re doing.

You are confronting Challengers.

See, there’s no Adventure otherwise. think of any great adventure story. Just imagine there were no obstacles on the path. What is that? It’s nothing. The only reason that the story means anything is because of the obstacles. if you just stay at home, you have nothing. There’s no story. You don’t grow, you don’t change, you don’t learn anything.

They might not see it that way, because if they’re stuck in the drama triangle, they’re not going to appreciate that, but so what?

If they don’t want to be a creator, you don’t even hear it. You treat them as creators whether they know it or not. Whether they admit to it or not.

You can’t have Rescuers either. No one needs to be rescued. See, the Challenger is a good guy. When the Creator is hurt by the Challenger, that’s a good thing. So, The Rescuer becomes the Coach.

The Coach’s job is to help the Creator create. it’s not to save the Creator from anything. The creator doesn’t need to be saved. The Creator is God.

You don’t need to save God from anything. You need to help God do God’s work.

Piano lessons that respect WHY we do music at all. Piano lessons for adults who were bullied as kids. Piano for meditators.